Disappearance of the Witchcraft

Miami. December 22, 1967. Real estate and hotel magnate Dan Burack went on a short yacht trip in the evening along with his passenger, an Irish Catholic priest named Patrick Horgan, on board a 23-foot-long cabin cruiser called the Witchcraft.

They set out to Buoy #7, less than one mile away from the shore, intending only to view the dazzling spectacle of Miami's coastline lit up with Christmas lights, and then head back. But at 9pm, the Coast Guard received a message from Burack, stating that his craft had struck something unknown in the water. Although it was not an emergency, Burack said, his boat needed a tow back to shore. According to the Coast Guard, Burack was perfectly mellow and calm during the radio message. From this, it has been surmised, we can assume that whatever Burack hit in the water, it didn't damage the hull - otherwise his message would have been a mayday alert and not a mere request to be towed.

The Coast Guard knew exactly where Buoy #7 was, of course, but Burack indicated he was about to fire off his flare gun anyway for good measure. Though that flare never appeared, the team scrambled into action and arrived at Buoy #7 only nineteen minutes later, but there was no sign of the ship.

Even if there had been a huge gaping hole in the hull that Burack had been unaware of (not likely - Burack was a meticulously expert seafarer) it is inconceivable that the ship could have sunk so quickly. Doubly so, because the Witchcraft was extensively fitted with built-in floatation, rendering it essentially unsinkable. It, or portions of it, should have been bobbing up out of the ocean or just below its surface, even if the entirety of the craft had taken on water. 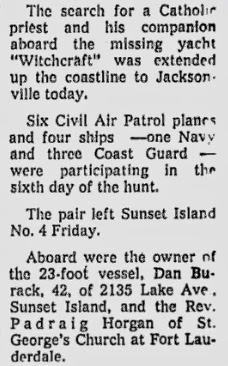 The ship was fully stocked with more life jackets and preservers than was necessary, and even the seat cushions on deck doubled as floatation devices. This means even if the ship had somehow been forced against all odds to the bottom of the sea, these items on deck should have been left floating behind, leaving evidence that the Witchcraft had been there.

But there was nothing when the Coast Guard arrived at 9:19pm. Nothing but the eerie clanging sound of the buoy.

Any conceivable disaster that could have befallen them still begs the question, why didn't they radio back a second time? And why didn't they send up the flare? How did every trace of the ship completely vanish when at least parts of it and on-deck materials should have been floating? Why were Burack and Horgan not still in the water in their life vests and preservers, even if the ship unexpectedly sank? And if it did, how did it sink in less than nineteen minutes? And even if sharks had gotten the pair, their life vests and preservers should have still been floating, and the water should have still had a sheen of blood easily seen by the Coast Guard searchlights scanning the water.

One doesn't have to be a devotee of the paranormal to conclude that the facts just don't make sense. The Coast Guard must have felt the same way - "but - but - it just has to be here! It can't have just vanished!" - and so they continued widening the scope of the search to increasingly illogical distances. They finally admitted defeat and called off the mission on December 28, after fruitlessly searching 24,500 square miles. 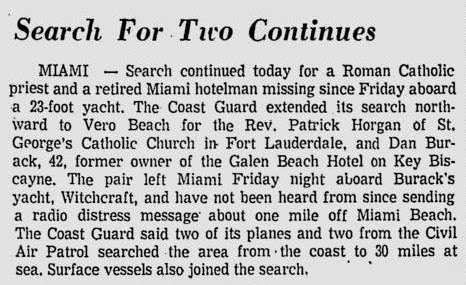 I'm not one of those "I Want To Believe" types - I already have certainty that there is more under Heaven and Earth than dreamt of in your imagination - but I do feel it's worth mentioning that the disappearance of the Witchcraft took place within what is known as the Devil's Triangle and/or the Bermuda Triangle, that area which, some say, has been the site of more than its share of disasters, deaths and disappearances.

In 1918, for example, the USS Cyclops vanished in the Triangle, and the disappearance of the ship and its 306 crewmen and passengers without a trace remains, to this day, the single largest loss of life in U.S. Naval history not directly involving combat.

In 1945, a grouping of five planes known collectively as Flight 19 vanished in the Triangle during a Navy navigation training flight from the Naval Air Station at Fort Lauderdale, Florida. No trace of the planes or an explanation of what happened to them has been conclusively found. (Steven Spielberg referenced the incident in his film Close Encounters of the Third Kind by including the Flight 19 pilots among the humans that the aliens returned after borrowing for study.) 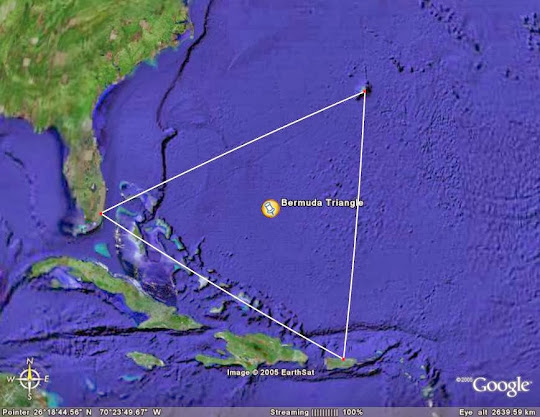 And in 1996, University of Louisville basketball star Derek Smith dropped dead unexpectedly during a cruise to Bermuda on a ship called the Dreamward (since renamed the Norwegian Dream.) According to the New York Daily News:

Smith was seated upstairs in the lounge, chatting with several people. Suddenly, his eyes narrowed, opened and then closed. His head moved back. "C'mon Derek, quit messin' around," someone said. Smith's body slumped to the right. Another passenger ran over, found a very faint pulse and started administering CPR. Ship medical personnel rushed in and spent the better part of a half hour trying to resuscitate him.

Despite their efforts to jump-start Smith's heart, it never produced more than five beats in succession.

Interestingly, another death cited as a possible Bermuda Triangle case is that of a man named Derrick Smith, who vanished off the coast of Savannah in 2001.

Posted by Meta-Oceanic Research at 8:06 PM